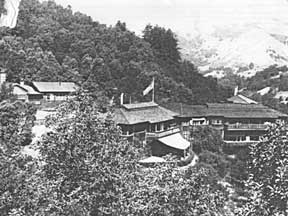 CAMP AREQUIPA, once known as Hill Farm, has a rich history that has always included young women. Once a tuberculosis sanitarium for women after the 1906 San Francisco earthquake, Arequipa was a haven from the dust and debris in the air that was making so many women sick. It was the dream of Elizabeth Ashe, a socialite who wanted to help others, and the money and property of Henry Bothin, which prompted them to find a place in the “fresh air and sunshine” for these women. On September 11, 1911, the sanitarium, named Arequipa, meaning “a place of rest,” was opened.

In the 45 years it existed, Arequipa treated patients from almost every state in the United States and even some foreign countries. To encourage therapeutic and marketable pursuits for the working class women who were patients at Arequipa, the founders encouraged them to make pottery. The distinctive pottery created there has been sold and treasured worldwide. In 1956 the sanitarium was closed due to advancements and successful treatment of tuberculosis. Four years later Marin County Girl Scout Council acquired use of the land and started Marin County Day Camp. In 1961 the Girl Scouts took over the 47-acre site for a 20 year lease at $1 per year. The property continued to be leased at a fee of $1 per year until 1989 when the Bothin Foundation generously transferred title of the acreage to Girl Scouts of the San Francisco Bay Area.

In the true spirit of Girl Scouting there couldn’t be a better acknowledgment that that which was stated in the Independent Journal’s editorial of November 8, 1961, regarding the dedication of Arequipa, “What more fitting thing could be done with it (Arequipa) than to rededicate it to our future, the women of tomorrow? What better use for it than to train the girls to be better women and citizens of tomorrow?”